Who wants to ban assault weapons? Nearly everyone

So why do McConnell and Senate Republicans refuse to act?

Americans across the political spectrum overwhelmingly support banning assault weapons, which one study showed are responsible for “86% of the 501 fatalities reported in 44 mass shooting incidents” in the U.S. between 1981 and 2017. According to a recent POLITICO poll, 70% of Americans, including 54% of Republicans, are in favor of the common-sense measure.

Trump’s claim in the wake of the El Paso and Dayton shootings that there’s “no political appetite” is simply false. When Trump and Republicans claim that there isn’t public support for an assault weapons ban, what they really mean is there’s not support from their NRA donors—even gun owners overwhelmingly support a ban! 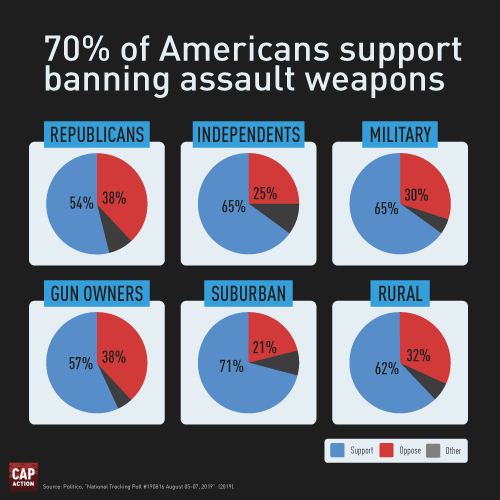