“We will hold this president accountable.”

Nadler to Trump: You won’t get away with obstructing justice

Another member of Trump’s inner circle just defied a subpoena from Congress. At Trump’s direction, former White House counsel Don McGahn failed to appear for his scheduled testimony before the House Judiciary Committee this morning.

Chairman Jerry Nadler sent a blistering message to McGahn, Trump, and allies in Congress who are sowing disinformation to protect the president: “Our subpoenas are not optional…we will hold this president accountable.”

Share Rep. Nadler’s message so that everyone hears: Trump’s stonewall of obstruction will not stand. 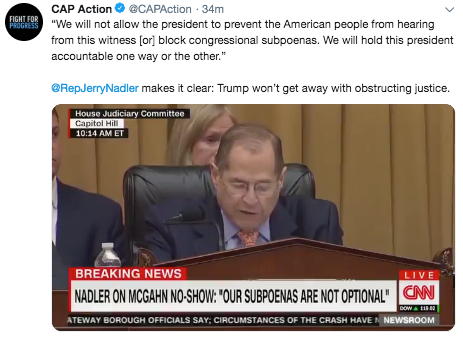 Tune in to the Center for American Progress Ideas Conference tomorrow to hear directly from Rep. Adam Schiff, Chairman of the House Intelligence Committee, on oversight efforts. Then, watch Speaker Nancy Pelosi sit down with CAP President Neera Tanden to talk about the Democratic agenda for the American people and plans to hold Trump accountable.

#StopTheBans Protests Across the Nation

Abortion is health care. Abortion is a right—and we need your help to make sure it stays that way.

In the face of Republican attacks on women’s rights and health across the country, Americans are standing together today to demand that the GOP #StopTheBans.

Find an event near you today at StopAbortionBans.org, and let Republican lawmakers know: They can’t attack our rights without consequences.