Worse than we thought.

We already knew how dangerous Brett Kavanaugh is to our rights and freedoms. He praised the dissent in Roe v. Wade and wants to put the president above the law.

Today, Judge Kavanaugh had every opportunity to clean up his mess of a record, but he only made it worse. 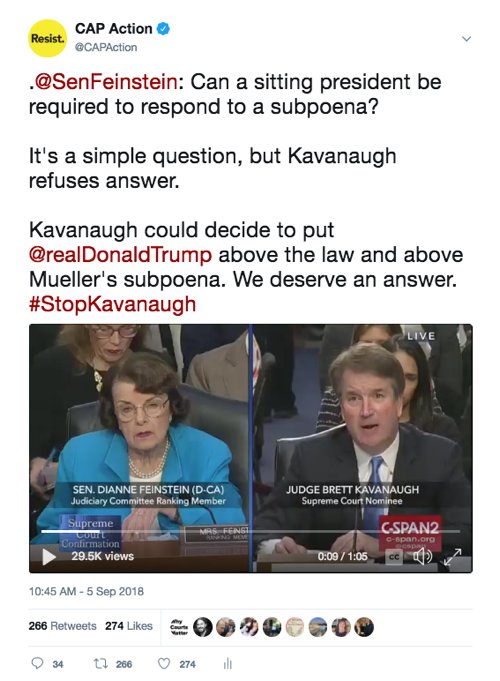 And despite a lot of fluff, Kavanaugh also refused to revise his opinion that U.S. v. Nixon—the Supreme Court decision that required Nixon to hand over the Watergate tapes—may have been wrongly decided.

That, combined with the unprecedented efforts to conceal at least 93% of his record in government, his evasive testimony, and dubious positions on presidential power and immunity make it clear: Kavanaugh is a willing participant in Trump’s effort to obstruct justice and cover up his own corruption.

In fact, there were new signs that he has been a part of political cover-ups before, and the truth is being hidden in the secret documents.

The American people will be the ones impacted by decades of a Justice Kavanaugh. We deserve transparent answers, and we deserve to have our voices heard.

A YEAR OF LIVING IN LIMBO FOR DREAMERS.

A year ago today, President Trump rescinded the DACA program, upending the lives of nearly 800,000 Dreamers. He then tasked Congress with fixing the mess he created.

Despite several attempts by Democrats to gain GOP leadership support for bipartisan fixes to the crisis, Dreamers continue to face uncertain futures in the U.S. Unless the rate of renewals increases significantly, more than 400,000 DACA recipients could lose their protections next year.

By refusing to come to a bipartisan solution, it’s clear that President Trump and Republican leaders in Congress are stonewalling to hold Dreamers hostage and push their anti-immigration agenda.

Ending DACA not only hurt Dreamers but also our national economy. DACA is a key part of revitalizing the economy, particularly in rural areas. In fact, CAP estimates show that removing all DACA recipients from the U.S. workforce could result in a loss of $460 billion in U.S. GDP over the next decade.

The hostage-taking needs to end: Dreamers who are eligible to renew should be able to do so without one more day’s delay. Congress must act to fix Trump’s manufactured crisis—not exploit it for political gain.