“There’s nothing wrong with taking information from Russians.”

As Trump’s “legal spokesman” Rudy Giuliani stumbled through his response to the Mueller report over the weekend, one comment stood out: “There’s nothing wrong with taking information from Russians.”

Why has Giuliani shifted from Trump’s “NO COLLUSION” mantra to arguing that there’s nothing wrong with it? Because—despite what you might have heard—the redacted Mueller report lays out volumes of evidence on Trump and his campaign actively encouraging, being updated on, and, yes, colluding with the Russian attack on our democracy. 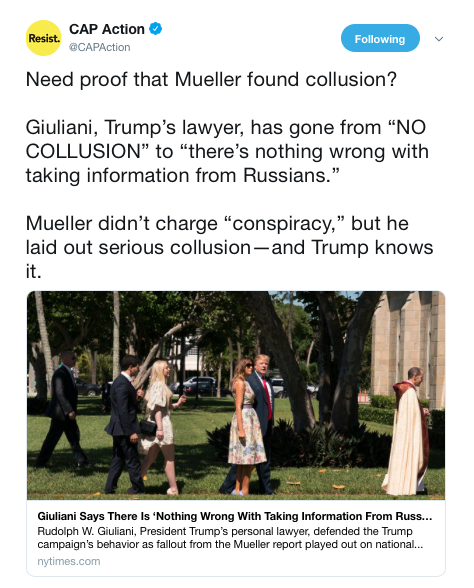 So with so much documented collusion, why no charges? Mueller stated that he couldn’t establish enough evidence to formally charge a narrow conspiracy crime—in part because Trump and so many others obstructed the investigation and refused to cooperate.

Here’s just a sampling of collusion by the Trump campaign in the Mueller report:

As House Intelligence Chairman Adam Schiff (D, CA-28) said, the Mueller report provides “ample evidence of collusion in plain sight.” Now it’s time for Congress to bring the findings in Mueller’s report to light for the American people by getting the unredacted report, holding televised hearings with all involved, and holding Trump accountable.