Someone should remind House Republicans.

Instead of condemning Trump’s impeachable abuses of power—the evidence for which he provided himself—most Republican members of Congress have defended Trump’s extortion of Ukraine for his own political gain.

Our democracy is at risk. As the impeachment inquiry continues with the top U.S. diplomat to Ukraine, Bill Taylor, who testified today, Republicans have to choose: Will they put country over party and protect our democracy? 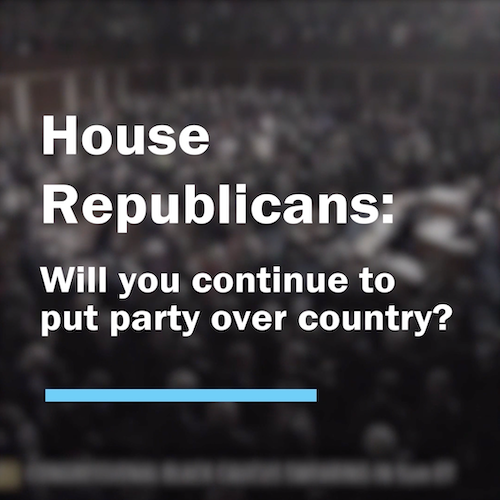 In a vile tweet this morning, Trump inappropriately compared the impeachment inquiry to lynching and compared himself to thousands of African American lynching victims. Far too often, the burden of immediately condemning Trump’s racism falls on African American lawmakers. Today was no exception:

Trump has a long and appalling history of racist comments. He told congresswomen of color to “go back” where they came from. He promoted the racist and false birtherism attacks against President Obama. He attacked the late Rep. Elijah Cummings’ district as a “very dangerous & filthy place,” and a “rat and rodent infested mess.”

It’s no coincidence that Trump turns to these racist attacks when he is most politically vulnerable. They are atrocious and offensive, and they are also transparent. Right now, Trump wants to distract from the inquiry into his impeachable abuses of power, but it won’t work. Members of Congress must condemn his racism and move forward with the impeachment inquiry.