Losing the health care that keeps you alive

“I’m constantly worrying about having our health care ripped away from us.”

Cancer took Jeff’s voice. Thanks to the Affordable Care Act, it didn’t take his life.

A former Republican from Arizona, Jeff wasn’t in favor of the Affordable Care Act. Then, the law’s protections for pre-existing conditions saved his life. Now, Jeff, like millions of other Americans, has to fear Trump’s cruel efforts to rip that care away.

A lawsuit filed by Texas and backed by Trump has one goal: take down the ACA. That suit will be heard in the 5th Circuit on July 9. If they succeed in court, the entire law would be repealed.

Trump told voters he’d make sure everyone had access to “great health care.” He broke that promise, and coverage for millions of Americans is now at risk. 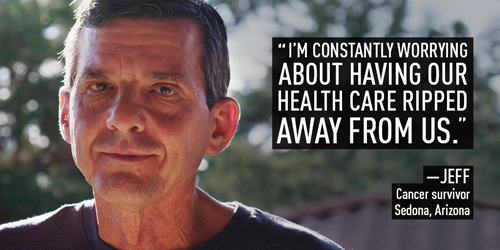 Trump admitted to “Russia helping me to get elected”

Robert Mueller’s message to Congress yesterday was thrown into even sharper relief this morning, as Trump tweeted admitting to “Russia helping me to get elected.”

After denying and lying about this fact for years, Trump came out and TWEETED it. This comes one day after his admission that the Mueller report contains evidence that he obstructed justice.

Mueller’s report and his press conference were a step-by-step impeachment referral to Congress, and Trump is clearly scared. His unhinged press conference on the White House lawn this morning proves it. The scene was alarming, riddled with frantic lies and tangents beyond even Trump’s usual rants.

As CNN’s Jim Sciutto put it, “Make no mistake here: the president on the White House lawn there recited a series of claims—long debunked claims not based in fact—easily contradicted and fact checked.”