That’s the reality for migrants being held in Border Patrol facilities in Texas.

Days after the news broke about the abuse of child migrants in detention facilities, a report from the Department of Homeland Security’s inspector general details more horrifying conditions in detention camps in Texas. Migrants are without basic sanitation, wearing soiled clothing for weeks, and suffering through outbreaks of lice, scabies, flu, and chickenpox. 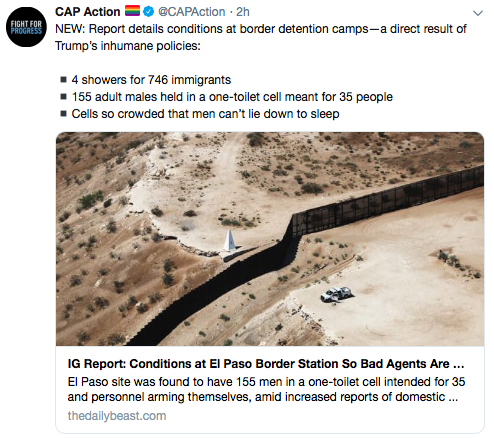 As usual, Trump’s performance at the G20 summit was alarming and embarrassing for our country. Prior to the summit, Trump insulted our allies and praised hostile foreign leaders. His behavior with Russian President Vladimir Putin was not only a stark contrast, but part of a pattern that a new Pentagon report calls a threat to national security because it enables the Russian attack on America and other democracies.