“In the 24 hours after you watch this video, 90 people will die from gunshot wounds.”

After failing a background check in 2014, the West Texas shooter who killed seven people over the weekend purchased his weapon through a private sale—a transaction which, because of loopholes in our system, doesn’t require a background check.

Share this video to remind McConnell and Senate Republicans that they work for their constituents—not Trump or the NRA. It’s time to vote on H.R. 8: 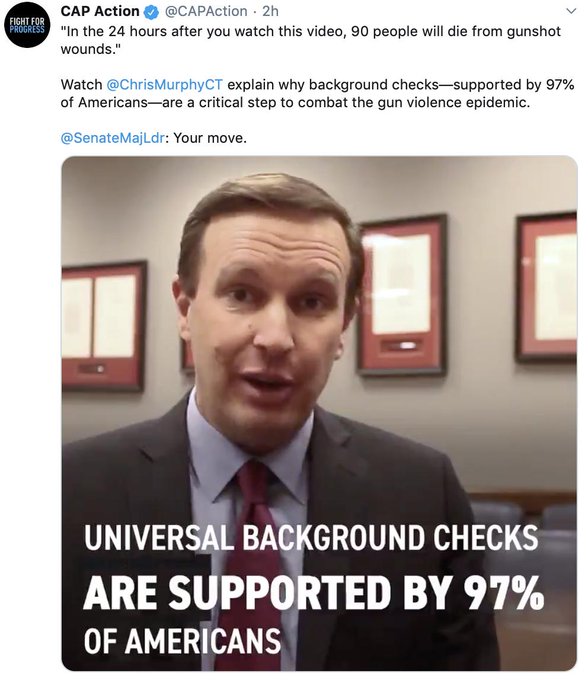 Trump demands that our troops, not Mexico, pay for his wall

The public made it clear that they don’t want Trump’s racist, ineffective border wall. There was a long, harmful shutdown over it. Congress refused to give him the money he asked for. That should be the end of the story, right?

Wrong. Trump is now stripping $3.6 billion in funding from 127 military projects to pay for a wall that no one wants (and that Mexico was supposed to pay for, remember?). And that’s in addition to the $2.5 billion he has already diverted from other military programs.

The list of things Trump will sacrifice for the sake of his political monument to hatred just keeps growing. Reports surfaced last week that Trump has illegally promised subordinates pardons in exchange for breaking the law to build the wall. He told them to “take the land” from private citizens along the border regardless of the law. Now, he’s bypassing Congress, taking resources away from our troops, and racking up a massive bill for the taxpayers—all while children and families suffer because of his cruel immigration policies.