Today was the last jobs report before the midterm, so it seemed like a good time to check on Trump’s constant boasts that we’re seeing the “Best Economy & Jobs EVER.”

Here’s the truth: Trump’s first 21 months of job growth are down 9% vs. President Obama’s last 21 months. 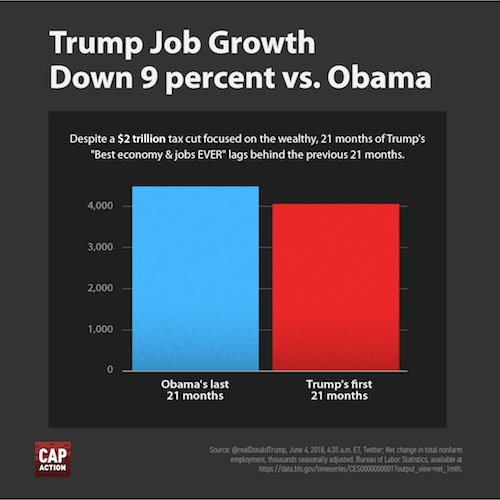 WHAT YOU SHOULD WATCH FOR ON ELECTION NIGHT:

At the heart of the midterm elections has been the American people’s 100%-right belief that Trump and Republicans in Congress are looking out for themselves and their donors, not working families.

How do we break the cycle of corruption? 130 House and Senate candidates have taken a hugely important step by pledging to reject corporate PAC money.

“…for voters to have trust in those government policies, they must first believe that the politicians creating them are serving the public’s, and not lobbyists’, interest. That’s why rejecting corporate PAC money is such an important step for Democrats to take. It shows voters that you understand that political corruption is a real concern for them and it demonstrates whose side you’ll be on. Perhaps most importantly, it affirms that your policy decisions won’t be influenced by corporate contributions.”

Imagine an America where politicians are accountable only to their constituents, not corporate interests. On election night, to borrow from Rachel Maddow, watch this space.

Prof. Carol Anderson on how Trump’s stoking white rage and resentment through policy as well as rhetoric; Ian Millhiser on where SCOTUS is headed with its new right-wing supermajority; PLUS: TalkPoverty’s Pat Garofalo drops by with a roundup of ballot measures getting voted on next week. Check out the episode for more.