Trump promised to “fix” student loan debt. Instead, he’s proposed gutting programs that help with student loans, which would leave tens of millions of Americans to pay the price.

43 million people like John Wallis, a recent medical school graduate with a passion for service, owe a combined $1.5 TRILLION in student debt. 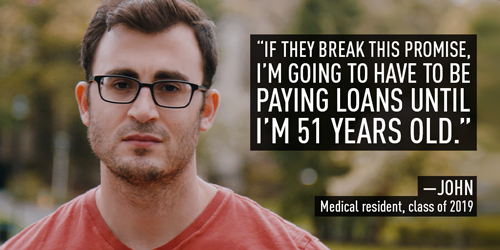 Trump’s administration has been hostile to students since the start. Last year, Secretary of Education Betsy DeVos proposed rules to cut an estimated $13 billion in student loan relief for students defrauded by for-profit colleges.

Trump invites foreign governments to interfere in the 2020 election

Last night, Trump gave another direct invitation for foreign governments to interfere in the 2020 election, smearing the FBI in the process:

Congress must take action to safeguard our democracy against foreign interference—and against Trump himself. Rep. Adam Schiff had a suggestion on Maddow last night: “Plainly we’re going to have to spell it out crystal clear in the law that getting dirt from a foreign power is considered a prohibited foreign contribution to a campaign. We can call it ‘The Donald Trump Act’ if we need any further clarity.”

The U.S. Office of the Special Counsel announced today that White House counselor Kellyanne Conway violated the Hatch Act on multiple occasions and “recommends that she be removed from federal service.”

We wonder what “alternative facts” Conway will spew to spin this one.