“How cold can you be? Those are children.”

Trump’s inhumane family separation policy is a stain on this country—and it’s a deal breaker for people like Liz from Michigan, who voted for him in 2016.

We’ve endured two years of Trump’s agenda, but for many Americans, his cruelty is most apparent when it comes to immigration. Trump tore thousands of families apart, some permanently, and just this week news broke that the administration was considering a plan to arrest 10,000 children and immigrant families around the country.

America deserves better than a president who rips children from their families and puts them in cages. Share Liz’s story on Facebook and Twitter to spread the message: 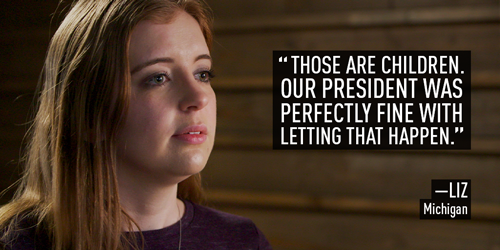 The Trump administration is rolling out a new immigration proposal later today. Here’s what we know:

Official White House Position: Trump is above the Law

The White House appears intent to continue obstructing every investigation into Trump’s corruption: